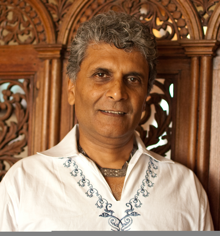 We are delighted to have been asked to create an evening of vibrational healing with Ranjan, acclaimed healer from Sri Lanka.

Olivier and Ranjan will be co-creating this workshop where you will learn powerful breathwork techniques as well as visualisations to help you integrate the harmonious sounds of the didjeridoo to raise the potential of your DNA.

Ranjan is in the country to do specialised healing work for a client in London. We are fortunate enough to have him come to Cornwall for a weekend of teaching and healing sessions.

Please arrive ready to start at 7pm. The workshop will run for about 90 minutes with a mixture of teaching and experiential elements. Yoga mats and cushions will be available and please feel free to bring extra cushions, blankets or mats for your total comfort.

Here is a short biography to help you get a feel for Ranjan’s work:

Ranjan is the Lankan who has been to Buckingham Palace most frequently. It’s the effectiveness of his professional work, which he has developed himself, that takes him there. His clientèle includes members of the former Iranian Imperial Family and the British Royal Family.   Just as it got him to be one of the healers (a person with the ability to infuse energy into biological matter) chosen for research at Harvard University.

He has run workshops all over the world, (specifically Europe, Australia, and the US) on how to incorporate the best of Western science and the best of Asian science into one’s healthcare routine.

Ranjan was born sick (his mother was lucky to get 2 consecutive hours of sleep the first nine months of his life) and learnt to convert to being chronically well. A seemingly miraculous transition that was the outcome of integrating Asian medical science with the drug regime of Western medical science on which he was brought up and without which he would have died. He has taken no medication in some 45 years now. When his chronological age was 60 years, he measured a metabolic age of 45.

Herbert Benson’s research published in the New Scientist in 2013 validated that meditation can change your genetic inheritance from less health to more healthy. This experience showed him that meditation is the mechanism for tapping informational fields outside the space time continuum (watch Ripples through the Mind, if you don’t understand what that means!) through which we fulfil our genetic promise ~ health is the side-effect. He learnt that health is not a mystery of chance it is a mastery of choice. So he doesn’t get sick any more.

His professional work is as an academic, a healer & life-coach. He’s been on Faculty at Universities in Britain and the United States teaching at the undergraduate and Graduate levels. As a coach he educates people on how to use the body the way evolution has designed it to be used. That gives consciousness a prominent role in his work – unlike the bio-medical model which excludes it. His unique blend of Western science and Eastern science, integrating the personal and the professional, underpins his professional success.

He has been on television in Britain, the US, Australia, Sri Lanka, India and Pakistan talking about his professional work. His publications include a refutation of the claim of Western science to be objective knowledge and an analysis of the model of Ayurvedic knowledge about health showing it is more scientific than the bio-medical model.