You are here: Home / General News / Land of the Rising Fun – Part 2 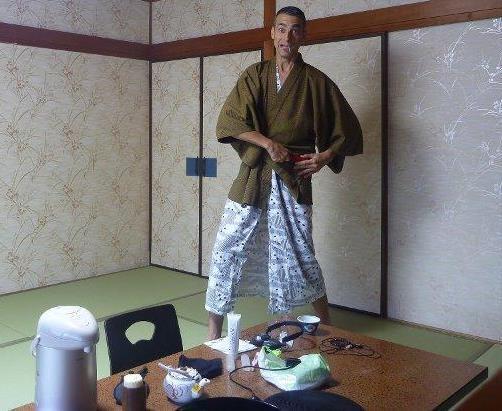 My host family, the Tanaka were hospitality itself. Hiro and Miki with their son Shotaro, then 3 years old. They nearly crashed the car as we drove to their house and I told them I don’t eat cat very often. I had confused ‘neko’ with ‘niku’ the word for meat. After a hearty laugh at my grasping of the language our friendship was set. Over the next 3 weeks I studied at GenkiJACS – Japanese and Cultural School with students from all over the world. It was a joy, language studies in the morning, cultural visits to Silk factories or temples in the afternoon then back home on the train to dine with the host family and practice speaking with little Shotaro. One evening we headed to a large temple to see a fire matsuri – festival. Young men in loincloths running around with huge flaming bamboo on their shoulders, fortified against the cold by copious amounts of alcohol. Culminating in a huge pyre while hundreds of people moved around the temple in a clockwise direction, keeping the cosmic order in balance. The weekends were our own so with 4 others we arranged to take the bus to Nagasaki for the weekend. What a delightful surprise this port city was. The first part of Japan to open to the West when Dutch traders entered this closed society a few centuries ago, it has retained its colonial buildings as well as a huge long street of amazing Japanese temples with their gardens. We visited ground zero and met a survivor from the atomic blast of 1945. A wonderfully warm man preaching peace. That evening we headed up one of the hills that ring the city to an onsen, hot springs. That has to be one of the most relaxing evenings I’ve spent in my life, lying in a hot bath under the stars looking out across the city. Awesome. The next weekend myself and another teacher from Australia took advantage of our proximity to Korea and flew the half hour to Busan, from there up to the ancient capital, Gyeongju. As with many package holidays there can be often be some surprises. Our hotel had the wonderful name Hotel Kolon. It was minus thirteen degrres that evening, so after getting frozen checking out the local gift shops and restaurants we were glad to get back to the hotel and get into some Kolon Sport, as the bath house was called. Opting for a body scrub, I was intrigued to see the masseur wrap a towel around his wrist to secure a sort of scouring pad and then proceed to remove the top layer of skin from 90% of my body. What an endorphin rush that was! Felt pretty good the next day though. I was sad to leave the Tanaka family and the school after the 3 weeks. I had made good friends there. The Japanese receptionist was married to a Cornishman and had lived in Saltash, just a few miles from where my parents lived. Uncanny. One last hurrah – Kyoto. City of temples. I found a place to stay, owned by an internationally famous ceramicist it turned out. I visited Nara with its giant Buddha and deer-filled park. I saw people dressed up in Kimonos visiting amazing temples, I even caught a glimpse of some Geisha. So mysterious. I resolved to return to Japan and study some more at the end of the year. This was 2011, during that year Japan’s East Coast was devastated by the tsunami. Visitors cancelled their trips for fear of radiation poisoning from the destroyed nuclear power station at Fukushima. When I returned to Fukuoka in December that year the school appeared to be running just the same. It was later, at the school Xmas party that I found out that the school had nearly had to close when student numbers plummeted. It was only through the shared sacrifices of the school family of teachers and managers and staff that it had kept going. I love this about Japan; everything is done for the greater good and with harmony in mind. Together and united, all things are possible.