You are here: Home / General News / Land of the Rising Fun – Part 3 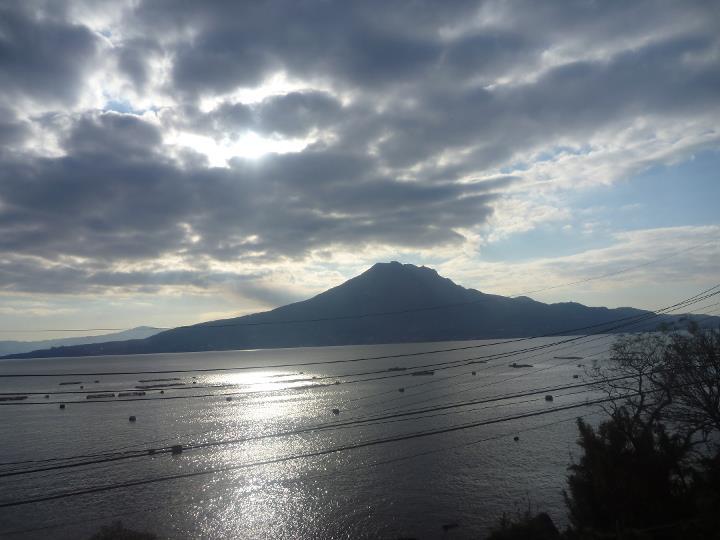 On my weekend I took a train to Kagoshima in the very south of Japan. I wanted to see the volcano there, Sakurajima. A friend had helped me with the booking so I followed the directions I was given, taking first a bullet train, then a local train and then a taxi up winding roads to a small settlement on the banks of a wild river. The small hotel had an onsen downstairs. When I entered there was an eruption of noise from downstairs. Apparently the local football club were holding their Christmas party in the bath house, and having a mighty fine time by the sound of it.

Once again I got to sleep on tatami mats and eat delicious local food while sitting under a kotatsu – a low table with a heater fitted underneath. Rather than heat the whole room the kotatsu keeps you nice and toasty and the air is refreshingly cool.

That night I went exploring and found a series of warm pools further up the river bank. They belonged to the upmarket hotel at the centre of the village. It was 11 o’clock at night and no-one was around so I took the opportunity to bathe under the stars while seeing ice crystals form on the cold puddles around the hot stone bath. Pretty magical.

The next day I visited an amazing open air art gallery in the hills above Kagoshima, exploring amazing art installations amongst the forested hills. Before taking a panoramic train with glassed ceiling to the carriages for a memorable journey through tea plantations under clear blue skies.

The next day I journeyed down along the coast to Ibusuki. My dear friend Chris and his Japanese wife Hiroe had told me about the hot baths here. In this particular place the hot steam rises up through the black sand of the beach. I found myself lying on the hot sand in my yukata, light cotton robe, having steaming black sand raked over me. Most people stay about 20 minutes. I felt all the stress of the year’s teaching melting out of my bones. I was in there for over an hour. Total respect from the Japanese staff for this lanky Gaijin (foreigner)

Back on the panoramic train to Kagoshima, I took a paddle boat ferry across the bay to the volcano itself. The volcano is active, pouring clouds of black grit into the sky on a continual basis. It makes the air a bit gritty but the buzz of being so close to this window on the centre of the earth is amazing.

Japan had a couple more treats in store for me.

The Christmas party was my last evening in Japan, I’d be flying on to London the next day. At the party we were encouraged to do a party piece. Naturally I chose to play the didjeridoo – “can you guess the Australian animal from its sound?” What a hoot, especially when I made the sound of a mosquito and folk called out “Wani, Wani” – “Crocodile”. Slightly different but it does have an annoying bite…

After that party a few of us said what fun it would be to go to a Karaoke bar. A few teachers agreed so off we went and booked a room in the Karaoke club. They are amazing places, filled with echoing corridors between the rooms, which can be for 1 or 2 people but in case we were about forty students teachers and their parents.

We spent a good few hours singing Japanese and English hits and sharing drinks and nibbles. The mother of one of the teachers showed me how the red tiger eye bracelet I had found in Nagasaki was not so good for my body’s energy and gave me a replacement one made from round polished seeds. I still have it and wear it. We talked about Reiki and she showed me the type of energy healing she had learned. It felt really warm and humbling to have her share all this with me.

I left the Karaoke bar around midnight. The Tanakas live a fair way out of town and I didn’t want to miss the last train. As it was I only just got the last express train. What a contrast to the commuter train I was used to getting. It being Friday night just before Christmas there was quite a lot of good natured people getting on. One chap saw me standing there, smiled and launched himself at me shouting “Manchester United, Ryan Giggs” and other footballing references. His friend apologized for him in faultless English, legacy of 5 years in New Zealand.

Half way through the journey I realised that this express train was not going to stop at the station I needed. I figured I might have to get off at the stop before and walk along the tracks to get home. I underestimated the magic of this land!

A businessman started chatting to me. He had studied in the States and did business in Australia. He loved rugby so we had plenty to talk about. When he enquired about my stop I explained my predicament. No problem he said, my firm gives me a voucher for a taxi. Come with me and I will instruct the taxi driver to take you home.

I was home by 1.30am, pretty good going. Up at 7am for my flight to London via Seoul I was taken to the airport by Miki Tanaka, 5 months pregnant.

Since then I have been kept in the loop by yearly postcards of the family and even parcels of Japanese food. Friendship goes along way in the land of the Rising Sun.