You are here: Home / General News / Power vs Force 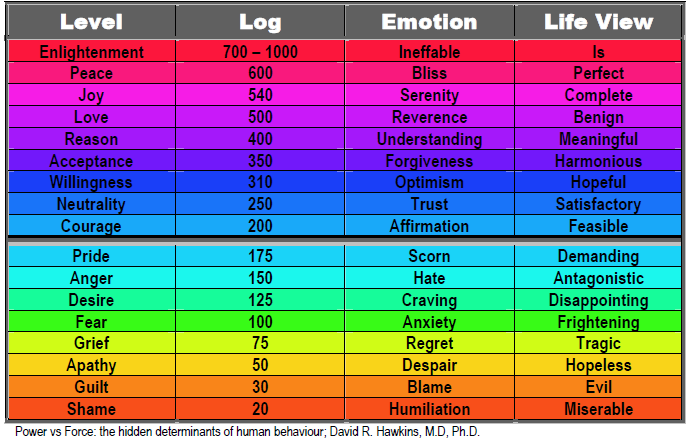 This book is blowing my mind. David Hawkins created a map of consciousness using kinesiology to calibrate different states such as shame, anger, courage, love and joy. Courage resonates at 200 and its the start of a journey of self determination. Love resonates at 500 and its the key to a high vibration life. Kinesiology taps into the body’s wisdom, eliciting a truthful yes/no response by the testing muscle strength. I’ve been using it for years as a guide to living a heart-centered life. What I’m loving about David Hawkins’s study is that it’s backed up by testing of millions of subjects. If you can follow the map it can guide you to enlightenment, pretty exciting 🙂 Here is an excerpt that has been going around my brain for the last few days: “The difference between treating and healing is that in the former, the context remains the same, whereas in the latter, the clinical response is elicited by a change of context so as to bring about an absolute removal of the basis of the condition rather than mere recovery from its symptoms. It is one thing to prescribe an antihypertensive medication for high blood pressure; it is quite another to expand the patient’s context of life to the degree that he stops being angry, hostile, and repressive.” Isn’t that an amazing concept? To actually change people’s perceptions of their issues so that they can take complete responsibility for what is happening to them and “change their context” It has made me realise that this is what we are doing during a healing treatment, putting people in touch with a larger frame of reference so that they can reframe any health issues into a different context and see it as a part of their life’s journey which can ring them growth and spiritual expansion. There’s a golden nugget on just about every page. I’ll be sure to share others as they come along. You can download your own copy of the book here: https://ln.sync.com/dl/354fdad50#ajz599na-6wysjpb9-ke6nr5qi-rp2d9a7u I especially recommend the introduction and Chapter 3 where he goes through each level.