Sound Bath Healing is a beautiful thing to receive personally for yourself or experience with others, be that your community, family, friends.

If you’re looking for light relaxation we’re probably not your people!!

It can be life changing for some. 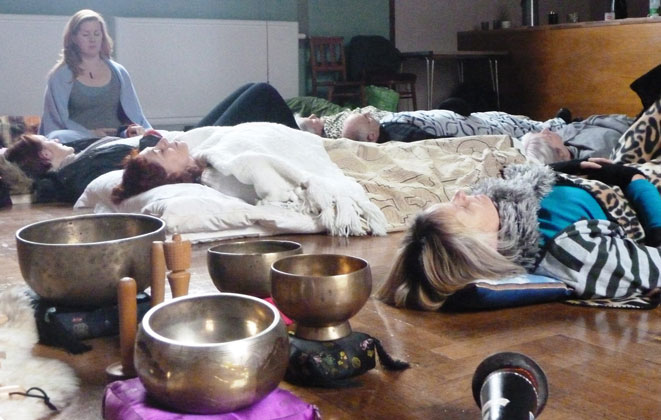 We are both ‘see-ers’ and are able to bring a potent cohesion for illumination, transformation and healing when we work together.

Our main instruments for vibrational energy transmission are didgeridoo, drums, voice and harmonium. This combination opens gateways through the realms, grounds you in deep connection with eternal wisdom and is an ocean to which you can effortlessly surrender. This allows for your body and pathways to receive beautifully.

Sound Bath Healing is a musical experience that speaks to your Soul. and your human-ness. Many people feel the vibrations through their whole body.

It can be a journey of spirit and senses calling you into a deeply restful space, some say it’s like coming home.

It can be Healing, awakening and opens portals into other realms and connections with higher states of consciousness.

How are you different?

Over the last five or so years many Sound Baths have popped up. We know that the modality is not, however, the main element. For us it’s the divine connections and conduits for the Sound and Songs to move through.

Megan brings through the Songs of Davish, The Woman of the Riverbank. These are songs, tones and frequencies of star constellations and pure love carried in the watery element of eternal wisdom. These channeled states allow her to see deeply and clearly.

Olivier has a strong Aboriginal presence with him when he plays didgeridoo. This presence showed up right at the start of him playing Sound Baths in Brisbane, Australia.

He brings the essence of the Earth and Infinite Creative potential of the void, simply said, the great portal of possibilities and healing. Olivier also naturally channels the ancient healing energies of his Reiki lineage.

How did Sound Bath Healing come about?

Olivier Founded SoundBathHealing in 2012. He’d seen the amazing results he was getting with reiki. He used to be a secondary school teacher and started playing didgeridoo for his students. They became noticeably calmer and more focused. Olivier realised he had the opportunity to reach lots of people instead of one at a time playing Sound Baths. And so SBH was born.

We jumped straight into playing for a room full of people. It was, immediately, an harmonious resonance. The second time we played we had so many people turn up we had people under and on top of the kitchen table. It was brilliant!

We played at festivals, people’s front rooms, community halls yoga studios in both the Southern and Northern Hemispheres.

Over the years we’ve evolved, refined, deepened and honed our special offerings.

We now mainly play online, reaching a global audience and finding that the profound experiences are just as potent as if we were in the same room with them.

Megan’s voice has an authenticity and naturalness that is beautiful in its simplicity and the apparent effortlessness with which it flows from her. The soft earthy tones of her voice soothe and calm and the stability and raw power she is able to bring can transport us to the depths of our being. Combined with the supportive sounds of the harmonium and Olivier’s drumming and sensitive, soulful didgeridoo playing we are held in a safe space as the synergistic flow of sounds from and between Megan and Olivier take us on a journey through sound that cannot help but transform and uplift us.

Their style of sound bath is unique to them and the tones and harmonies they generate as well as the harmony between this engaging couple bring hope as well as healing.  Lenni Sykes

Will you play for my group?

We love playing for communities with a collective focus, intent or vision. One for example is Sara Landon’s Community. Many people there are opening to their own channeling abilities. Some have reported a greater clearer connection while receiving SBH.

People love that they don’t have to ‘do’ anything. They can feel their creative pathways open and solutions arise with clarity.