You are here: Home / Work With Us / About Olivier Maxted 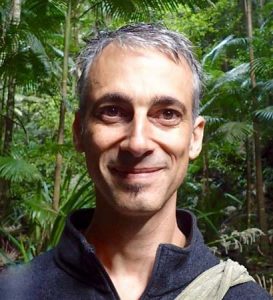 Olivier was born in Wales to a French mother and English father with Trinidadian roots. This mixture of cultures at home naturally created an openness to the world and a desire and ability to travel with an open heart. After studying French and Geography at Keele University he spent time living and working in France, Switzerland and London. In 1998 he fulfilled a long-held wish to visit family in Australia. He felt so at home he stayed for the next 15 years, teaching languages in high schools and loving the outdoor life.

After many years of bringing meditation and mindfulness into his work in high schools, Olivier founded the increasingly popular Sound Bath Healing. This draws on his lengthy experience in working with Natural Therapies in Australia, UK and Europe. He has a particular vision to build community and share the healing vibration with people in Cornwall and beyond. His collaboration with Megan Selby since 2014 has brought an even more powerful energy of healing and rejuvenation to the Sound Baths.

His journey in the healing arts has been focused on Eastern philosophies studying Buddhist meditation, ear acupuncture and Shiatsu massage, culminating in Reiki Mastery. Olivier offers Reiki treatments to people wishing to clear emotional blockages or physical pain. He also teaches Reiki to enable people to heal themselves and others.

Olivier has been taking his didjeridoo on his journeys ever since he started playing. He’s played in Greek Orthodox Churches, Stone circles, in a hot yoga studio and even underwater. He has played Sound Baths across 4 continents. One of the most memorable was playing in the Redwood forests of California at midnight, feeling the presence of these majestic trees.

Latest from the blog